We are a camping family.  It all started four years ago with an idea my wife,  Carrie, had in order to save money on an annual trip to Indiana.  We have good friends there who adopted two boys from the Democratic Republic of Congo.  We try to get up there every year to see them but it is pretty expensive, especially when we have to rent two motel rooms each night due to the size of our family.

Have Tent: Will Travel

We were able to purchase a tent, three air mattresses, a tiny grill, and a porta-potty for about the price of a one night’s stay in two rooms at the average motel.   Carrie decided that we needed to try out the equipment before leaving on our trip, you know, just to make sure we could do it.

So one Saturday night we set up the tent and went camping…..in our backyard.  No problem.  We set up the tent, didn’t sleep at all, and in the morning took down the tent.  We were ready.  Or were we? Carrie decided that the only way to really find out was to spend a night at Sea Rim State Park on the Texas Gulf Coast.  Camping on the beach, what a great idea!

On paper it was a great idea. Carrie made reservations, which was easy since every space was available.  Hmm.  We checked the weather, warm and sunny.  So, after work one Friday, we took off for the beach to camp. We had our camping equipment, our beer, hamburgers and our swim gear.  This was gonna be great. 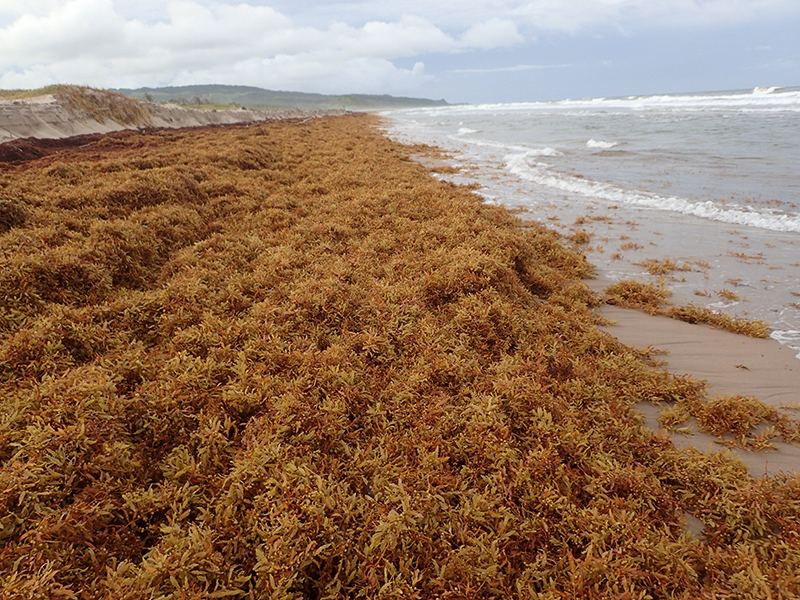 Two hours later we drove into the park and up to the beach to find……SEAWEED.  Sargasso Seaweed, two feet deep and as far as the eye could see, to the right and to the left and about 200 feet out into the water.  Yuck!  We went closer to see if perhaps there was some way we could actually get to the water.  Nope!  Tons of insects swarmed the stinking seaweed.  No way in heck were we going to go out in that.  Oh well, I guess we won’t swim.  Lets cook up some burgers and marshmallows.

Terror From The Sky

By the time we got the fire going, cooked up the burgers and ate them it was almost sunset so we went straight into marshmallows.  Around the time the kids stuck their second marshmallows into the fire, they hit.  Mosquitoes! Not just one or two, no, hundreds of them swarmed suddenly and viciously. Like a scene from a war movie, the mosquitoes dive bombed us, biting us from head to toe.  I’m not an expert on mosquitoes but I do know that there are many different species and I know that we had never encountered this one before.  They were tiny, but their bite was painful like a fire ant sting, followed a split second later by intense itching

From the time I sensed the first bite until we were in full panic mode was at most two minutes.  The suddenness and fury of the attack can not be exaggerated. We were dashing around putting food away, dousing the fire, getting the kids into the tent.  It took perhaps three minutes to get ourselves in and to begin putting benedryl on our bites.  I thought beaches were too windy for those little suckers.

So what do you do when it is still just a little light outside but you are trapped in your tent?  Well, if you are like us and didn’t bring a single thing to read, watch or play with, you go to bed.  So, that’s what we did. The only problem was that it was still over 80* outside and about 80% humidity.  Kids being kids, they quickly fell asleep, but not me and Carrie.  Nope we lay there awake and sweating all night and when the sun came up we left.  Thank goodness it was over.  It had to be one of the five most miserable events in either of our lives.  This camping thing was totally not fun and by  the time we had packed up our gear I had already decided that we were going to stay in motels on our way to Indiana.

Carrie has way more intestinal fortitude than I do and even though our first camping trip was a miserable failure, Carrie was undaunted.  We bought that equipment and by golly we were going to camp our way to Indiana come hell or high water, both of which would have been an improvement over our first experience.  Well, against my will, we did camp on our way to and from Indiana. The weather was unseasonably cool and dry and there was no stinking seaweed and very few mosquitoes.  The kids had a blast and and we saved a bundle on motel fees.  By the time we returned from our trip I was ready to go again.  Camping, you have vindicated yourself!

Since our first trip to Sea Rim State Park, we have gone camping over 30 times.  We traded in our tent for a trailer long ago and that has made it even more enjoyable for this softy. In future posts, I’ll be sharing some reviews of our favorite state parks and our best camping tips and tricks!

I would really like to hear about your camping experiences.  They almost always make great stories, either due to the fun you had, or the mishaps that you endured.  What are your favorite locations?  Any great camping hacks to pass along?  Please share,  I’m looking forward to hearing from you!

Brian Wood is a stay at home dad of six children adopted from China and the Democratic Republic of Congo. He enjoys homeschooling his children and cooking for the family. His hobbies include disc golfing, camping and trying as many craft beers as possible.
View all posts by Brian →
Subscribe

This site uses Akismet to reduce spam. Learn how your comment data is processed.

We promise not to spam!